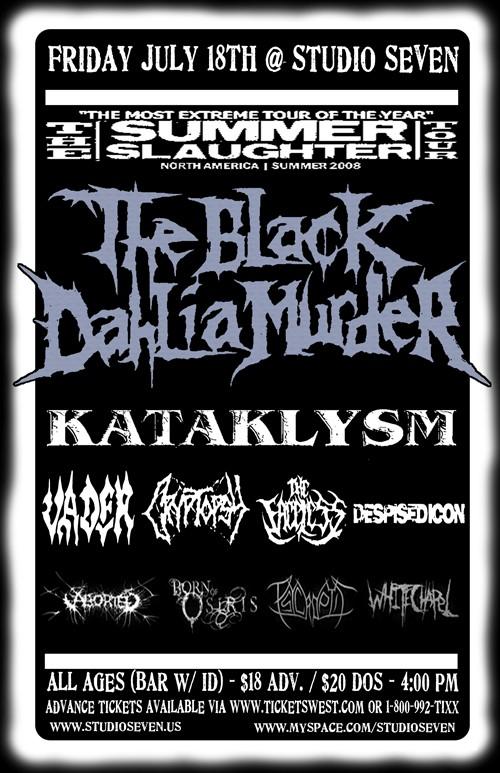 
Summer has finally reached Seattle, and with it beautiful 80 degree days, crisp breezes off
Puget Sound, and another installment of the Summer Slaughter tour. Having attended last year, I
have come to regard the event as something akin to "the CNN of Metal." Whether you like death metal
or metalcore, techmetal or grind, Summer Slaughter is an amazing one stop opportunity to immerse
oneself in metal and humanity while checking out the cutting edge of extreme music. So immerse myself
I did, joining the somewhat- greater-than-capacity crowd at Studio Seven for another evening of aural
assault.         With no fewer than 10 bands in tow for this year’s stop, the venue had expanded barricades
outside of the club to include an outdoor merch area, a cool touch which lent the show more of a festival
feel than last year. 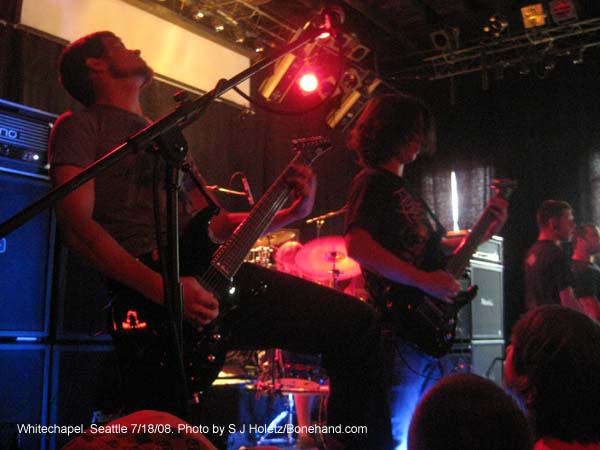 First up, Knoxville's Whitechapel , whose trio of 7 strings put out a solid wall of bass heavy noise
that got the crowd jumping early. A little too metalcore for my taste, but a respectable opening. 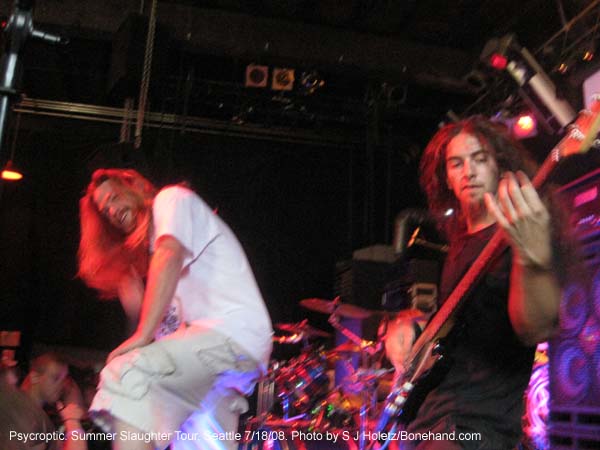 More impressive was the highly technical offering of Australia’s Psycroptic, as lone guitarist Joe Haley
managed to produce more sonic shrapnel than the 3 guitarists in Whitechapel combined. Haley’s guitar
work, combined with the paint peeling roar of vocalist Tony Reust of Unmerciful (standing in ably for
regular vocalist Jason Peppiatt, back in Tasmania for the birth of his first child), wasted little time in
establishing the band as an early show favorite. Definitely an act I’d like to hear more from. 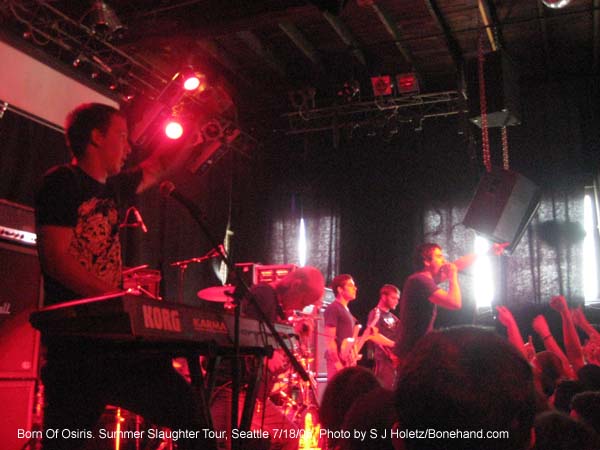 This was followed by Born of Osiris out of Chicago, who melded progressive keyboard touches
with metallic crunch, resulting in a vibe that reminded me immediately of their Sumerian Records
labelmates The Faceless, although with songwriting not quite as catchy or technically impressive.
Nevertheless, their short breakdown heavy set was entertaining if not memorable. 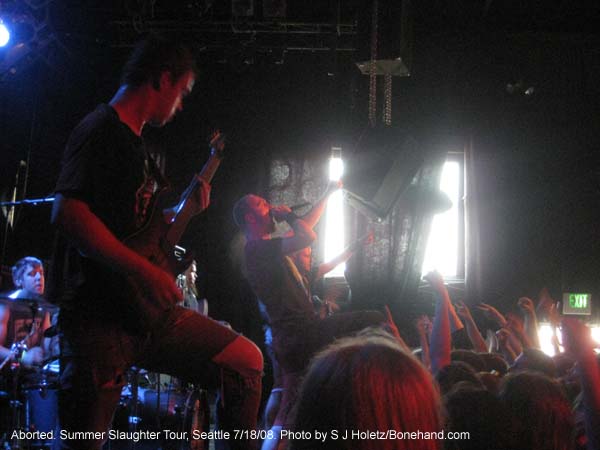 Belgium’s Aborted had no problem on the memorability front, immediately searing the brain
with a brutal set of blood-soaked death metal, their sound equal parts state-of-the-art Scandinavian death
and Floridian goregrind. Svenchi and Co. kicked seven different kinds of ass in their short set, excellent. 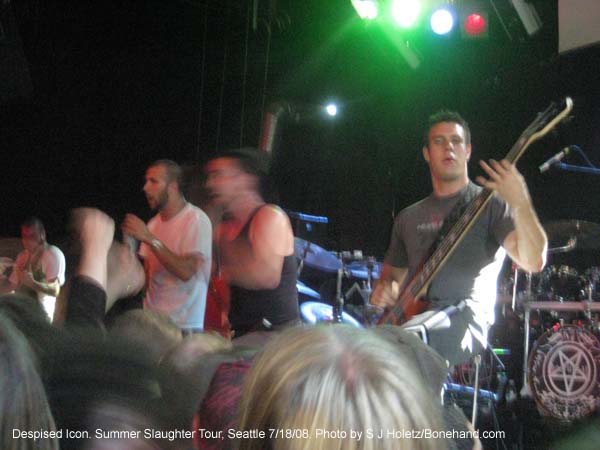 After Aborted’s electrically charged offering, I found Despised Icon’s set a little lackluster. The
music was definitely well executed, but it just didn’t grab me, and I was disappointed to hear that co-
vocalist Steve Marais' insane patented pig whistle proved difficult to recreate in the live setting. 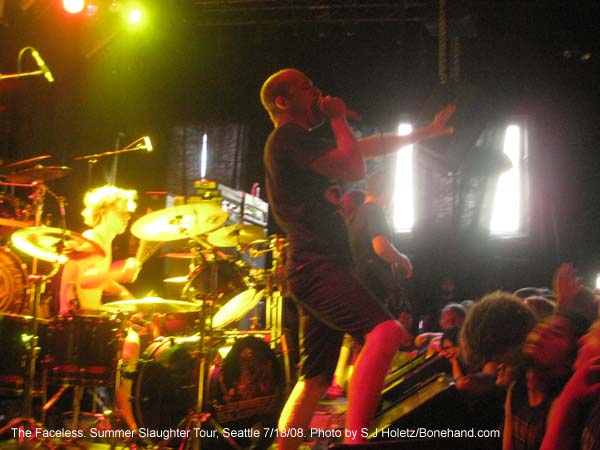 Next up was Los Angeles’ The Faceless, one of last year's highlights, and once again they did
not disappoint. This time with bassist in tow and sans keyboardist, their sound was tougher and more
brutal, without losing a bit of their signature technicality. The Faceless absolutely tore it up with crushing
versions of "An Autopsy" and "Pestilence", along with a couple of new tracks. An amazing band, I can't
wait to hear their new album come October.

Following The Faceless, I was really fired up for the next act Cryptopsy. I have been looking
orward to finally catching this brutally technical Canadian act live, despite the criticism they have been
receiving over their latest release, The Unspoken King, and new singer Matt Magachy. The criticism
had definitely followed the band into the club on this occasion, prompting one of fans next to me to say:
“I can't believe it man, that new cd is a total disgrace”. While I have my own opinion on Unspoken King
(not as good as I’d hoped, but not nearly as bad as I'd heard), I was more than willing to give them their
day in court. Yet before Cryptopsy could storm the stage, the show stopped. Literally.         At this point the venues management announced that the building was over capacity, and unless
150-175 patrons willingly relinquished their tickets (to be refunded or exchanged for admittance to a
future show), the Fire Marshall would be forced to cancel the rest of the evenings entertainment. So
while Cryptopsy played freeform jazz odyssey, incorporating a little Primus, the show sat in limbo
as the crowd waited for the room to bleed out. And waited. And waited. 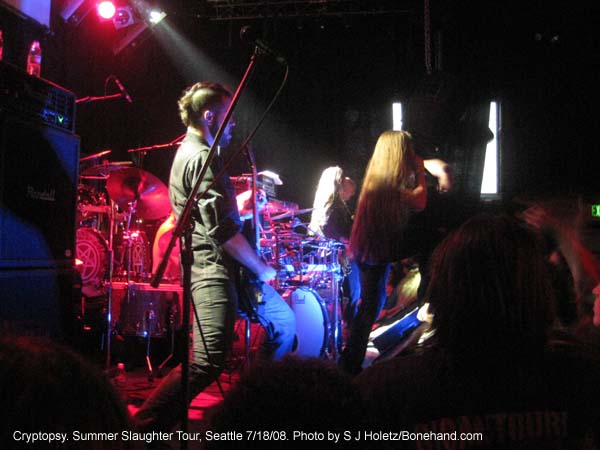 After 20 minutes or so, the crowd had been satisfactorily culled and the show continued. Once
unleashed, Cryptopsy brought the battle to the audience, taking the stage to intro-slash-internet-rebuttal
"Dinnertime" before slamming into the latest single "Worship Your Demons", the new discs most technical
track. McGachy, sporting a black "I don't give a fuck if you hate me" t-shirt, tore into the material with a
vengeance, vocal style adequate to the task if lacking in the sort of character that made Lord Worm so
unique. The bands set avoided controversy by sidestepping clean vocals altogether, sticking instead to
old favorites like "We Bleed" and "Slit Your Guts". The band performed as one perfectly calibrated
instrument of musical devastation, as guitarists Alex Auburn and Christian Donaldson lashed the
audience with barbed-wire licks anchored through their twisting time changes by Flo Mournier's brutally
precise drum work. Unfortunately, due to Fire Marshall-gate, the set was truncated to a mere 4 scorching
numbers, but with the last notes of "Phobophile" still hanging in the air, I could heard "total disgrace" guy
comment, opinion still in mid-flip: "That was fucking amazing". I concur completely. 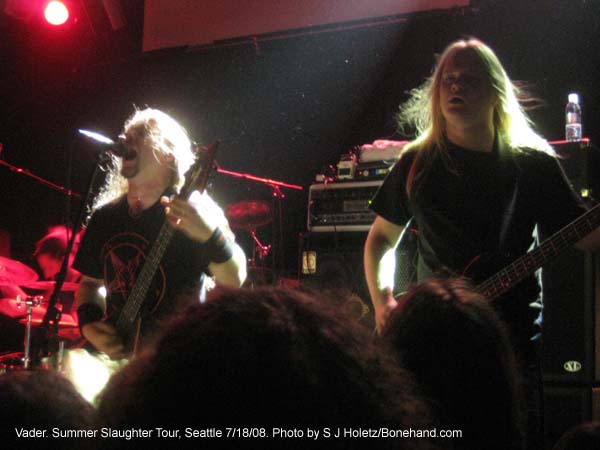 Next on tap: a serving of old school, evil death metal courtesy of Vader, Poland's veterans of a
thousand satanic tours. For this outing Peter and the gang were joined by Decapitated bassist Martin
Rygiel, marking his Summer Slaughter return to Seattle. As always, Vader were tight and heavy, laying
down wave after wave of fantastically crunching riffs and dive-bombing solos, as they inflicted "Carnal",
"Sothis", and "Wings" on the willing masses. It was awesome to finally catch Vader live, and I hope
that their crushing set turned a few new listeners on to this great band. 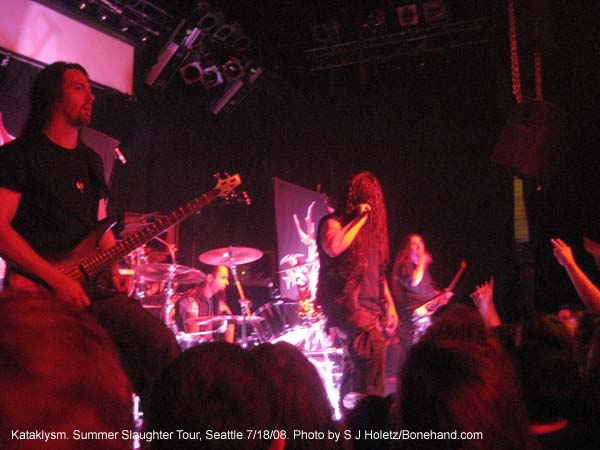 Taking up Vader’s challenge, Canada's Kataklysm answered in fine fashion, taking the crowd
by storm with a set heavy with cuts from latest rounder Prevail. Vocalist Maurizio Iacono did a fantastic
job connecting with the audience, interspersing affable banter between slabs of the bands catchy
Northern Hyperblast. Memorable tunes included “Chains of Power”, “Taking the World by Storm”, and
“Crippled and Broken”, all supremely entertaining.         I have to admit, I was a little surprised when I saw that Black Dahlia Murder was headlining this
tour. My experience with the band has been limited to a unremarkable second stage performance at
Ozzfest 2005, and a couple of viewings of their very cool Creepshow-themed latest video. 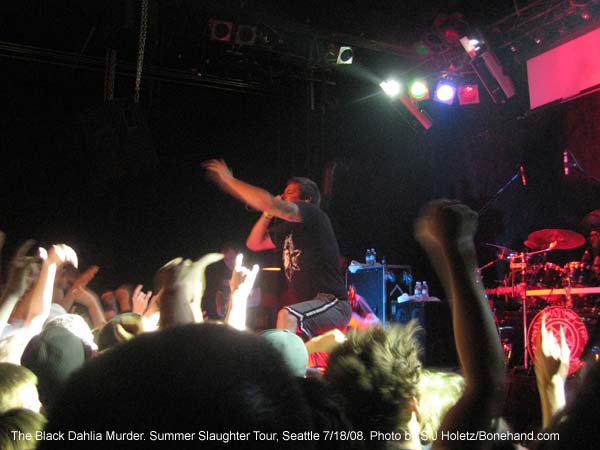 The band established their credibility in short order however, their brand of crowd-pleasing metalcore
immediately sending a torrent of younger stage divers flying off the stage like it was a waterslide. Set
highlights included rousing takes on "Nocturnal", "What a Horrible Night to Have a Curse", "Statutory
Ape" (complete with Gorilla suited minion) and "The Blackest Incarnation". By mid-set the pit was the
hairiest I’d seen since...well, those belonging to front man Trevor Strnad.         BDM even took a moment to revisit the Fire Marshall Issue, saying: "This next song is for all your
friends who had to leave the show. Tell them sorry when you see them. It wasn't our fault, WE didn't
oversell the venue."         As Black Dahlia Murder brought the show to close with a raging version of “Deathmask Divine”,
I had developed a grudging respect for their game. I can definitely appreciate the Maiden-influenced
guitar harmonies that inform their tunes and their dedication to showmanship. In all, an emphatic
exclamation point to a fine evening of metal.         So once again, I had a great time at Summer Slaughter. I was able to check off a few great
bands I had missed previously (Cryptopsy and Vader) revisit a favorite (the Faceless) and discover a
few cool unfamiliar acts for additional listening (Aborted and Psycroptic), definitely a productive and
enjoyable show. I must reiterate, Summer Slaughter is a great opportunity to survey the modern
metal landscape. Do not miss it. 9/10