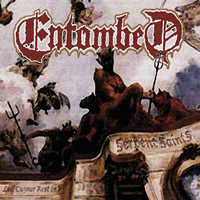 Serpent Saints: The Ten Amendments, the long awaited new release from Sweden's
Entombed, finally hit the streets this week. This is the album that was originally slated for
release on 06/06/06, so after such a long delay I couldn’t wait to dig into this latest effort
from one of my favorite merchants of metallic deviltry.

The CD kicks things off in fine fashion with the title track, which begins with a creepily
descending acoustic guitar and piano intro reminiscent of "Morning Star". The intro builds
in volume, speed and intensity before busting into the driving main riff and a first verse that
immediately brings to mind Motorhead’s “Iron Fist”, complete with a bellowed YOU
KNOW ME! Then, the coolness factor ratchets even higher for an epic call and response
chorus. The climax of the song is huge and crushing, just what you'd expect from the mighty
Entombed.

Things don't let up for a second as Necrophagia vocalist Killjoy joins Entombed throat
LG Petrov for “Masters of  Death”, a thrashy salute to all things death metal. This tune is as
old school as they come, the thundering approach accompanied by shoutouts to a ton of
classic bands. Notable is the breakdown that inexplicably splices together the machine gun
bridge of Metallica’s "One" with “Hip Hop Hooray”(!), freaking hilarious! This track also
closes out in monster fashion, reminding me of Slayer's "Angel of Death"

A plaintive gong signals the start of next track "Amok", a midpaced Death ‘N Roller
featuring a signature rusty riff from the band and an awesomely angry vocal from Petrov.
This is followed by a more black metal vibe in "Thy Kingdom Coma", which is cool while
you are listening to it, but ultimately one of albums less memorable songs.

The same cannot be said of "When In Sodom", which is a great track either here or
on last years EP of the same name.  Excellent riffage, with smirk-inducing lyrics a nice
counterpoint to the tune’s crushing delivery.

This is followed by the sludgy, Sabbath-esque crusher "In the Blood", an instantly
infectious grinder. If your head doesn’t start banging instantly to this one, then your
neck is broken.

Next up is "Ministry", the album's second driving if nondescript rant against
organized religion. The riff here is decent, and again LG sounds great, but the song
is strangely lacking in venom. Frankly, this would be a great track for any other band,
but any other band doesn't have “Out of Hand” in it's back catalog, which mines this
same territory in a far more effective and pissed-off fashion.

Then we segue into the cleverly titled “The Dead, the Dying and the Dying to be Dead”,
a chunky intro followed by a wave of black metal trashing and unexpected time changes,
before again building to a great thundering chorus. I really dig the A-Nile-ating post-chorus
riff on this one.

This is followed by the excellent “WarefarePlagueFamineDeath”, a scorching
traditional thrasher, before the CD closes with an atmospheric outro, the likes of which
was done better on last EP’s “Amen”.

Serpent Saints is a fine chapter in the legacy of the mighty Entombed. The
band has managed to keep their patented crushing sound intact, despite the loss
of founding guitarist Uffe Cedarland. The CD has a ton of tasty riffs, and lead belter
LG Petrov’s face-melting roar sounds fantastic.

But all is not perfection. On the negative side, there are no tunes here that even
approach the gripping immediacy of Inferno brain-wrench “The Fix Is In”. And while
I appreciate the references to influences and roots that can be found throughout the
CD, such asides betray a slight lack of originality in the songwriting on this effort.
Additionally, Serpent Saints weighs in with a scant 10 tracks, one of which is a
holdover from the previous EP, and another arguably a throwaway outro. Even
combined with the When In Sodom EP, as a fan I feel like I spent 2 years and
$25 bucks buying one 14 song album, which is weak sauce.

In concusion, Serpent Saints is a very good if not great album from a hugely influential
and talented band. It has moments that will make existing fans grin ear-to-ear, but I
would suggest Clandestine, Wolverine Blues or Uprising before this one when
converting new listeners to the infernal majesty of Entombed. And I have to say, if
the recent lineup changes, album delays, and cancelled tours that have dogged this
star-crossed band of late are any indication, Entombed seriously needs to
renegotiate their deal with the devil, because they’re getting hosed. But then again,
that’s Satan's modus operandi, isn't it?