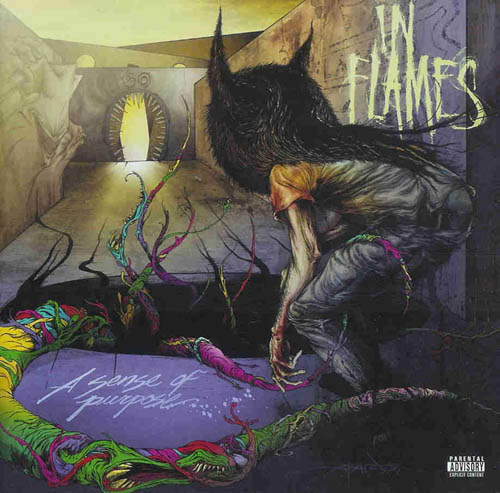 IN FLAMES – A Sense of Purpose

Remember that amazing restaurant you and the love of your life went to on one of your first dates? You loved
to eat there because the flavors were sublime, the atmosphere was unique, and frankly, because you simply couldn’t
make food like that at home. Then a few years later the place changed ownership, and while it’s still pretty good,
tasty even, every bite just serves to remind you of the greater glories of the past.

To me, that analogy perfectly sums up my opinion of A Sense of Purpose, the latest effort from Swedish metal
masters In Flames.

I was a relative latecomer to the In Flames fanwagon, having discovered them in 1999 (Thanks, Martin Popoff!)
immediately after the release of Colony. That album captured my imagination in a way that no band had since Iron
Maiden, dazzling me with it's amazingly melodic guitar pyrotecnics work. I was immediately compelled to pick up
their entire back catalog, along with each subsequent release as soon as it came out, this latest included. My two
favorite tunes from the band are "Embody the Invisible" and "Only for the Weak," two tracks that effectively straddle
the stylistic shift instituted on 2000's Clayman, a move from the highly-technical to the more hook-centric. It is from
this perspective that I approach A Sense of Purpose.


A Sense of Purpose is instantly ignited by the concise yet insanely catchy opening riff of “The Mirrors Truth” that
winds its way through this powerful, crisply crafted first single.  This is followed by “Disconnected”, which initially sounds
quite similar to the opener, before settling into the Clayman-esque twists that dress up this nondescript tune. This track
also boasts one of the CD’s most smirkworthy lyrics: “I feel like shit, but at least I feel something”.

Next the band shifts gears repeatedly throughout the solid cruncher “Sleepless Again”, before decelerating into the
soulful if dull groove of “Alias”. This is followed by standout cut “I’m the Highway” the driving opening riff and chorus
evoking that In Flames magic of old.

“Delight and Angers” (sic) revisits the riff to “The Mirrors Truth” yet again to diminished effect, while “Move
Through Me” stutters through a “Soundtrack to Your Escape” style vibe. This gives way to the CD’s most unique
effort in “The Chosen Pessimist”, a slowly building track reminiscent of Smashing Pumpkins, which is alternately
propelled by a nifty pulsing drumbeat from Daniel Svensson, and some subtle wah drenched rhythm work, before
ultimately arriving at a moving guitar and keyboard crescendo. Unexpected, yet pretty cool.

Propulsive shredder “Sober and Irrelevant” picks things up once again, opening the way for back to back epic
choruses in “Condemned” and “Drenched in Fear”, a tune also possessive of  some fantastic guitar interplay.
Purpose then closes out proceedings with the anthemic “March to the Shore.”

In A Sense of Purpose, In Flames have unquestionably continued to grow and evolve, while retaining their
own unmistakable sound. On the positive side, the CD sounds fantastic. Guitarists Bjorn Gellote and Jesper Stromblad
imbue their playing with style and economy, and Frontman Anders Friden is in fine vocal form, his roar both powerful
and gripping.

On the flipside, many of the riffs displayed here are somewhat simplistic, repetitive and derivative of each other.
The soaring and intricate guitar harmonies that so distinguished the band in their early years are used sparingly, although
much melodicism can still be found in the solos. Additionally, Anders’ angst–filled lyrics, when comprehensible,
often come off as annoyingly whiny. The only sense here is in the title, you'll find little in the lyrics.

Despite this, I find A Sense of Purpose to be a catchy, crunchy, extremely pleasant listen, it just doesn't hit
the sweet spot for me in quite the same way as their more technical early efforts. I enjoy it, but I find myself returning
the question that Anders asks in “Disconnected”:

“Is this all you have to give?”