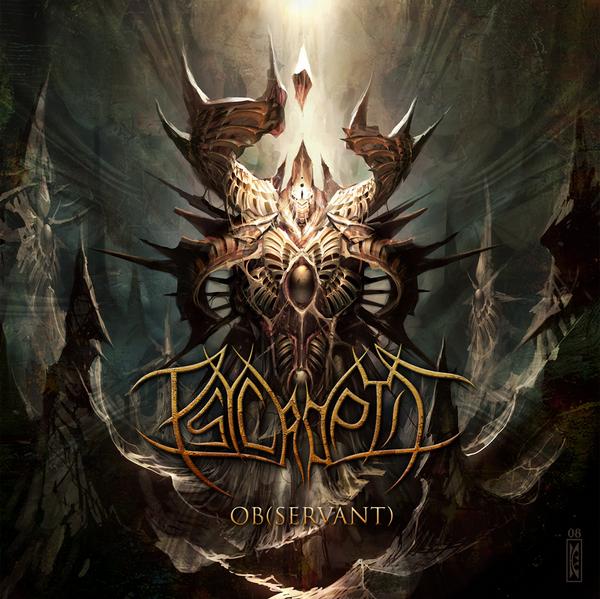 
You know the kind of album you hear every once in a while, that just meshes perfectly with your brain-gears the moment you hear it? Well, I was
fortunate to find one of those this week in Ob(Servant), the latest from Tasmanian death dealers Psycroptic [MySpace]. Having really enjoyed their brief stint
at the Seattle stop of this years' Summer Slaughter tour [Link], I was expecting a great CD, but...Wow.

Ob(Servant) blasts out of the gate with the barnstorming title track, a powerfully driving introduction to the next hour of carnage, as guitarist Joe
Haley sends shards of sonic shrapnel flying in all directions. It's amazing to me that one guitar can make so much damn noise, a thought I first had upon
seeing Psycroptic live. The awesome deathly bridge slows the pace to snap a few necks before the tune slips back into gear and screams toward the
finish, the band locked in noteworthy precision.

Next up, "Calculated Effort", a churning, mid-paced cruncher which showcases frontman Jason Peppiatt's triple threat vocal delivery, as he alternately
shouts, growls and barks like a death metal Cerberus while the band cycles through a series of satisfying old school death riffs.This gives way to the first
chiming alien strains of "Slaves Of Nil",which steps up the brutality quotient nicely, just one of the highlights of this great rounder.

This is followed by the perfectly titled "Shifting Equlibrium", which encapsulates one of the band's biggest strengths in Haley’s constantly shifting and
mutating guitar work. Never content to stay in one place, he leads the band through endless variations on a melody, keeping things exciting thoughout.
Yet while the music is amazingly technical, the flash never overwhelms the songwriting. To the contrary, each tune feels like a well-crafted organic whole.

"Removing the Common Bond" commands you to bang your head, and you will. Once the dizziness subsides, enjoy the electronic skittering segue
and monolithic riff which introduces "Horde in Devolution", another favorite. Here, Haley scatters a series of fills throughout the tune that are so perfect they
induce chills, before locking once more into groove with bassist Cameron Grant and drummer Dave Haley in a crushing march to the finish.

“Blood Stained Lineage" initially wallows in a bit grindcore vibe, before moving on to scorch the walls with white hot technicality. "Immortal Army of One" ups
the shred ante, presenting some magnificent chug before abdicating to the stuttering riffage of sprawling closer "Initiate". Here Peppiatt's bark reminds me a
little of Tomas Lindberg, one of the few times that I was ever reminded of another artist. All this and originality too? Unbelievable.

To close out my preposterous raving, Psycroptic's Ob(Servant) is a huge ball of sonic barbed wire wrapped around a massive fucking diamond. It is smart,
brutal, original, dazzling in it’s technicality, but never obtuse. I can’t stop playing it. It rules. Buy it.  10/10