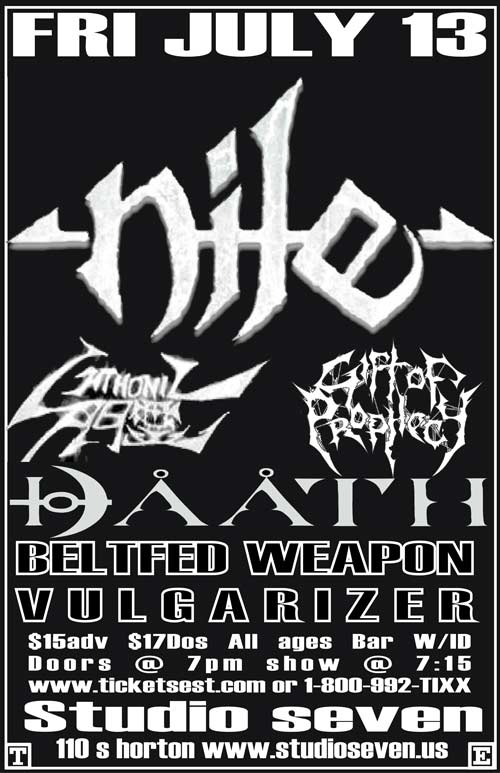 Featuring DAATH and ChthoniC, with Beltfed Weapon, Vulgarizer and Gift of Prophecy.

Once again this week, I made my way down to ’s sweltering Studio Seven for a metal
show of epic proportions. As mentioned in last month’s review of the Summer Slaughter tour, I have
long been anticipating what I considered to be the TRUE extreme tour of the summer, as the mighty
Nile hit Seattle for an Ozzfest off-date stop. Though a full set of alone was enough to get me
to the show, the rare combination of influences presented by the evening's headlining trio, ranging from
Egypt to Taiwan to the Hebrew Qabbalah, lent a uniquely international flavor to the proceedings.

The show was kicked off in perfect fashion by ’s Gift of Prophecy, whose tight,
infectiously riff-laden death metal immediately caught my attention and set my head to banging.
I enjoyed their short set immensely, and look forward to hearing more from this young band. 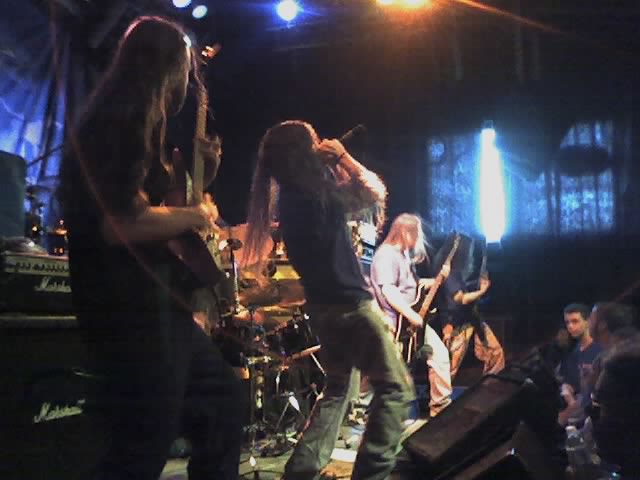 Suddenly, the crowd seemed to triple, a tribute to the following of favorites
Vulgarizer. Their set was a brutally blasting affair, all low-end sludge and squealing harmonics,
an impenetrable wall of speed and doom. Vocalist Brian’s window-rattling roar and hilarious
self-deprecating between song patter worked the crowd nicely. I didn’t catch a word of the lyrics,
but I have no doubt they were suitably vulgar.

The final local band of the evening was Beltfed Weapon. Perhaps it was a result of following
two absolutely electric openers, but BFW’s thrashy offering failed to grab me. My lone impression
of their set was that their gear seemed to overwhelm the stage more than they did the audience. 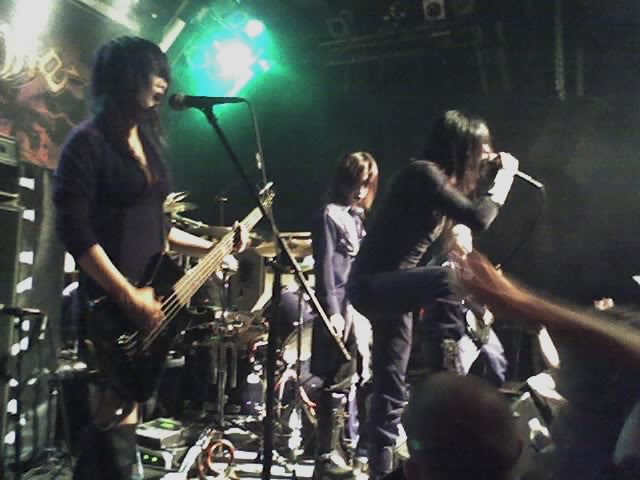 The crowd seemed to be alternately confused and bemused as the corpsepainted and
costumed ChthoniC took the stage. I confess, I had a few questions of my own. Could this
band from truly impress with their own brand of Black Metal? Could "the Black Sabbath
of Asia" win over this apparently incredulous crowd of brutal metal fans? Could drummer Dani
actually breathe through that spiked leather facemask? The answer was a resounding yes on all
counts. A fierce black wind, not to mention dry ice, soon engulfed the crowd, as singer Freddy
Lim‘s bloodcurdling shrieks had Seattle throwing up devil horns. ChthoniC definitely brings
something new to the table, with the haunting wails of the traditional violin-like Er-hu, keyboards,
and the ethereal backing vocals of bassist Doris all combining to lend a unique vibe to the band's
black metal attack. And they had a political message as well :

“Do you know why the United Nations fears ? Because the U.N. represents the world!
But Rules the UNDERWORLD!”

Classic.  Additionally, it was very cool to see such a nice following from Seattle's Taiwanese
community turn out in support. Nice work, Chthonic, you won over some fans tonight. 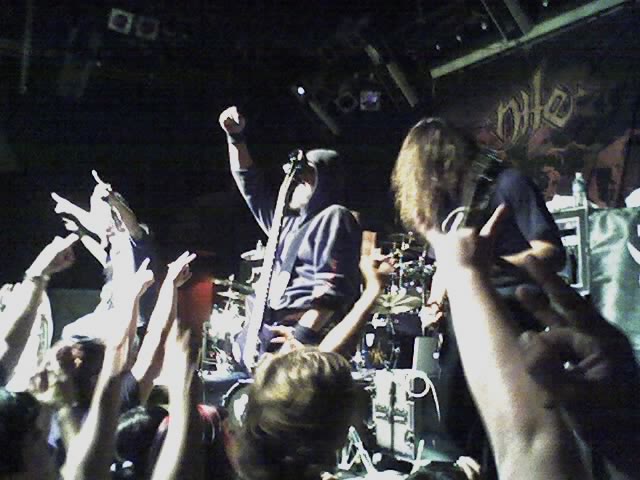 Next up, ’s DAATH, a band I was unfamiliar with, but had been looking forward
to seeing. The band hit the stage with an absolute vengeance, their intense brand of Qabbalah-infused
metal wasting no time in whipping the crowd into a frenzy. I was impressed by their sound, which
seemed to meld the dual-guitar pyrotechnics of Swedish Death with a wholly American sense of groove.
DAATH didn't let up for a second, strafing the crowd with crisp, stuttering riffs as frontman Sean Farber
led the band in a masterful, fiery performance, perfectly revving up the moshing masses for the
headlining onslaught. (Note to self: pick up The Hinderers.) 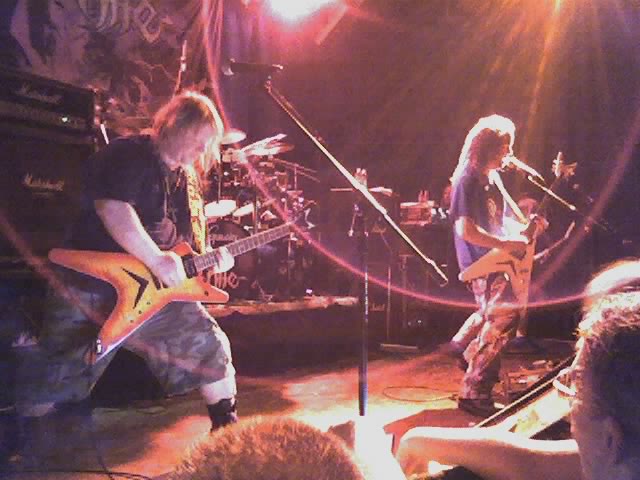 Unfortunately some of that momentum was lost during an interminably long set change
due to trouble with Karl’s electronics, but all was immediately forgiven as Nile took the stage to
the opening chords of  "The Blessed Dead" . The crowd soon regained it's edge as Karl and company
laid down slab after epic slab of precise, crushing metal, propelled by the remarkably tight rhythm
section of bassist Chris Lollis and drummer George Kollias. The set was heavy with new
tunes from the forthcoming CD Ithyphallic, which I was glad to have familiarized myself with
during last week’s streaming album preview. While I did miss a few old favorites, the new tracks
all sounded pretty damn great live, and were well-introduced by singer guitarist Dallas Toller-Wade,
whose stage presence was notable. To whit:

“This next song is about how we’re all pretty much going to end up as worm-fucking-food!

(Cue apeshit moshing and the proliferation of devil horns). Additional highlights were the spectacular
chill-inducing guitar wails from Karl during “Sarcophagus”, and the thundering  closing trilogy of
“Lashed to the Slave Stick”, “Annihilation of the Wicked”, and “Black Seeds of Vengeance”,
all brilliantly brutal.

I have to say, there have been some great lineups coming through Seattle lately, but I had more
fun watching this slate of bands than any I’ve seen this year. This is a must-see tour, catch it
while you can. As I left the show exhausted, sweat-soaked, and half-deaf, I was left with only
one request:

An evening with ? Two full sets, with intermission? Karl? ? Anyone…?

Set List
Blessed Dead
Sacrifice Unto Sebek
What Can Be Safely Written
Cast Down the Heretic (listed, but I don’t recall hearing it. omitted?)
Ithyphallic
Eat of the Dead
Papyrus Containing the Spell to Preserve Its Possessor Against Attacks
Sarcophagus
Laying Fire Upon Apep
Smashing the Antiu
Essential Salts
Lashed to the Slave Stick
Annihilation of the Wicked
Black Seeds of Vengeance