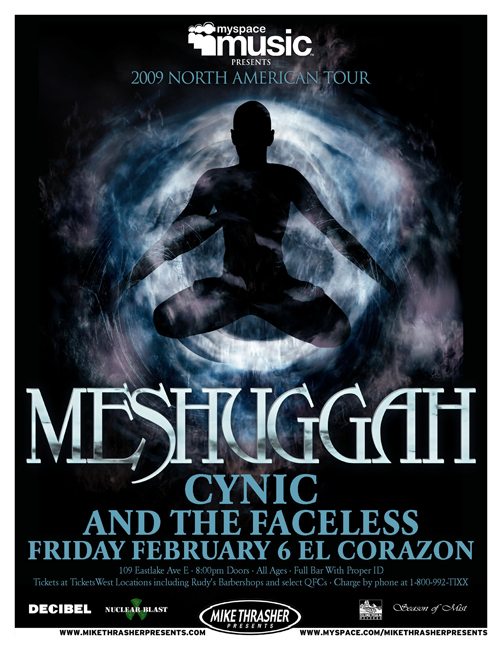 Meshuggah, with Cynic and The Faceless


After what has been a cold, showless winter here in , it was finally time to knock off the rust this
week and roust homies Leemo and A2thaC for an evening's immersion in the progressive end of death
metal's glorious Bacta Tank. Having previously caught 's Meshuggah only in a supporting role [link], I
had been greatly anticipating a full set from this tremendous band, and having the excellent Faceless and prog
metal pioneers Cynic on the same bill was a definite bonus. Thus, like the terrifying interdimensional entity which
threatens Earth from the latest Faceless CD, we descended upon El Corazon with ravenous ears.

Speaking of which, props to the El Corazon staff for the most efficient line handling I've yet seen at this
club. I can't recall a longer line, yet despite the sellout crowd, they managed to keep our time standing next to the
open dumpster at an absolute minimum, and we were soon wending our way past the recycling containers toward
the impending metal apocalypse. Well done. 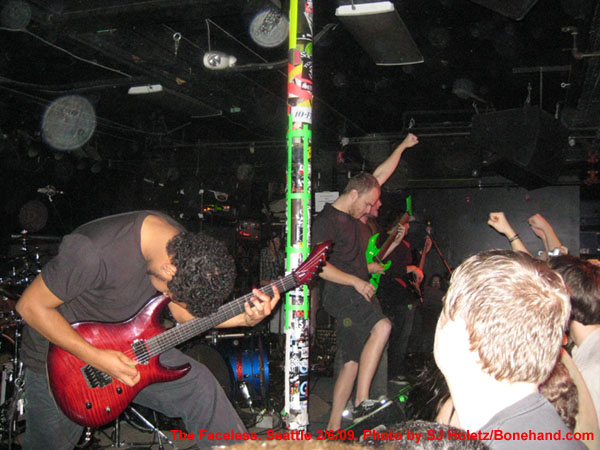 A round of Mac and Jacks (Redmond's Finest!) [link] and a Burning of I recording update (coming soon!)
[link] later, and we were primed for Los Angeles' collective The Faceless [Myspace] to kick things off. Vocalist
Derek Rydquist led the band with a single roared "Seattle!" as they opened with the sweepingly atmospheric
"Akeldama", before digging deep into latest release Planetary Duality (see Bonehand review [here]). Remarkably
tight and dextrous, guitarists Michael Keene and Steve Jones ratcheted up the brutality nicely, as they cycled
through new tunes “Xenochrist”, “Sons of Belial” and “Coldly Calculated Design”, with Rydquist trading his trademark
growls with (perhaps Cynic-ally inspired?) clean vocals from .

This was followed by a fantastic take on “Legions of the Serpent” before The Faceless shifted back to their debut
for stunning closer "An Autopsy." I was disappointed that personal fave "Pestilence" fell victim to the time constraints
of the short opening set, but as that was my lone gripe for the evening, life is sweet. 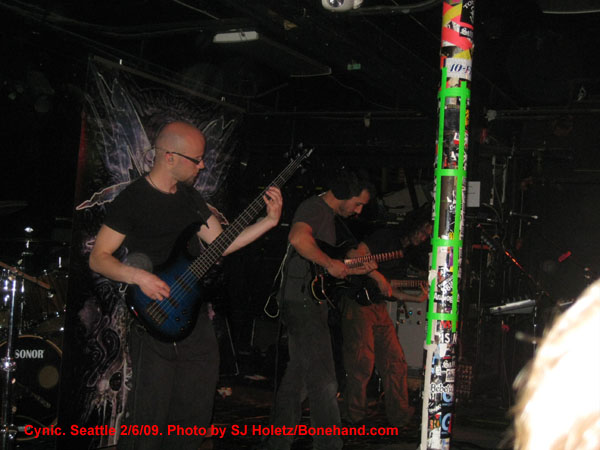 Next, we were fortunate to witness the first ever appearance of 's Cynic [link], who impressed
with their highly melodic offering, highlighted by the fluid technicality of founding guitarist Paul Masvidal. The guitarist
was joined for the tour by Robin Zeilhorst and guitarist Tymon Kruidenier, who supplied deathly growls in counterpoint
to Masvidal's sweet, soaring lead vocals, adding a distinctive touch to such tunes as "The Space for This" and classic
crowd pleaser "Veil of Maya". Yet despite the amazing axework on display, I found my attention repeatedly pulled from
the song at large to focus on the astounding jazzy cymbalwork of longtime Cynic drummer Sean Reinert, whose skills
served perfectly to whet the appetite for what was to come from Meshuggah’s Tomas Haake.

A moment of Spinal Tap-esque humor ensued during “How Could I” as the band's home-movie screen backdrop,
beautifully painted with the cover art to latest release Traced In Air, threatened to topple on the diminutive Masvidal.
However, disaster was averted thanks to a nifty one-handed save from Zeilhorst, and Cynic completed their satisfying
set with brilliant versions of "Celestial Voyage" and "Integral Birth." Many thanks to Reinert for sending a drumstick
spinning my way, a very cool souvenir. 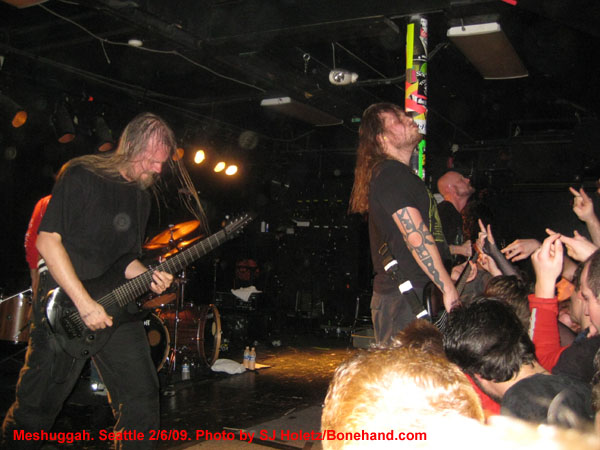 Finally Meshuggah [link],[Myspace] commandeered the stage, bludgeoning the crowd with the rapidly
stuttering opening riff to “Pravus”. The 8-stringed tones of  guitarists Fredrik Thordendahl and Marten Hagstrom
diverged then coalesced around the remarkably precise timekeeping of drummer Haake, a study in rhythmic
pulverization.  As always, ever-scowling frontman Jens Kidmans howled over it all, whipping his body in slow
motion to the percussive throb. 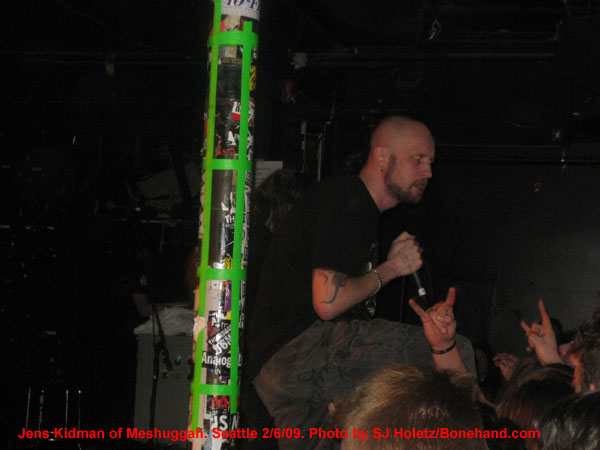 This was followed by the warping riffage of Obzen’s “Bleed”, which was played in it’s entirety, and shortly
thereafter a scorching version of “New Melinnium Cyanide Christ”. The ample set disappeared far too quickly as the
band tore through one great song after another: “Stengah”, “Lethargica”, “Sane”, “Rational Gaze”,and even early
crusher “Humiliative”. Throughout, Hagstrom roamed the stage like a caged lion, yet remained firmly interlocked with
Dick Lovgren’s bass as Thordendal cut through it all with his searing solos and whale song melodies. Mesmerized as
I was by the music, it was far too soon that Frederik pulled out the talk box for monster closer "Future Breed Machine".
I could have easily listened to Meshuggah play for several more hours.

In closing, this was one incredible show. The tour is short however, so catch it while you can. 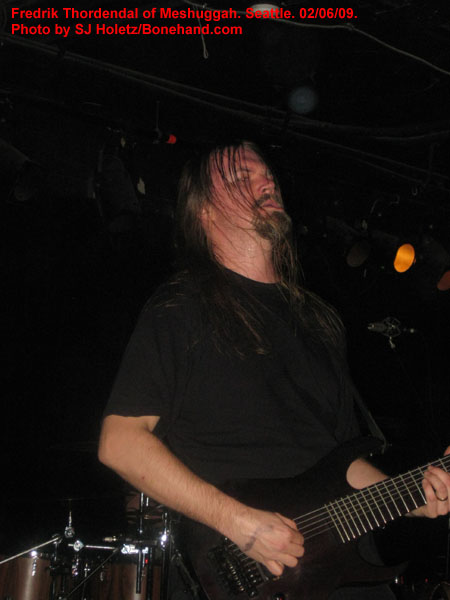 (I'm not 100% on this one, please email
any corrections to steve@bonehand.com)

Nunc Fluens
The Space For This
Evolutionary Sleeper
Veil Of Maya
King Of Those Who Know
Adam's Murmur
I'm But A Wave To...
How Could I
Celestial Voyage
Integral Birth 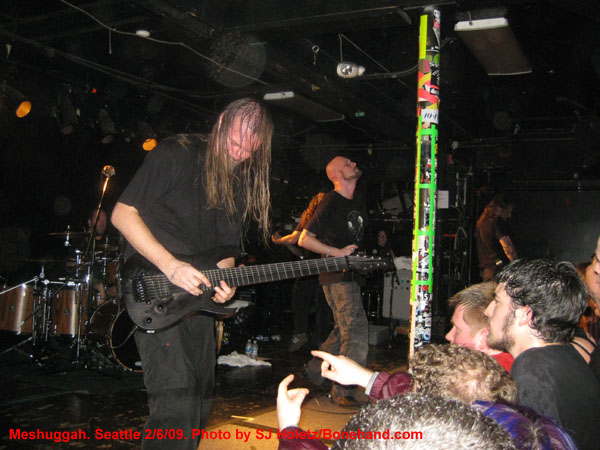