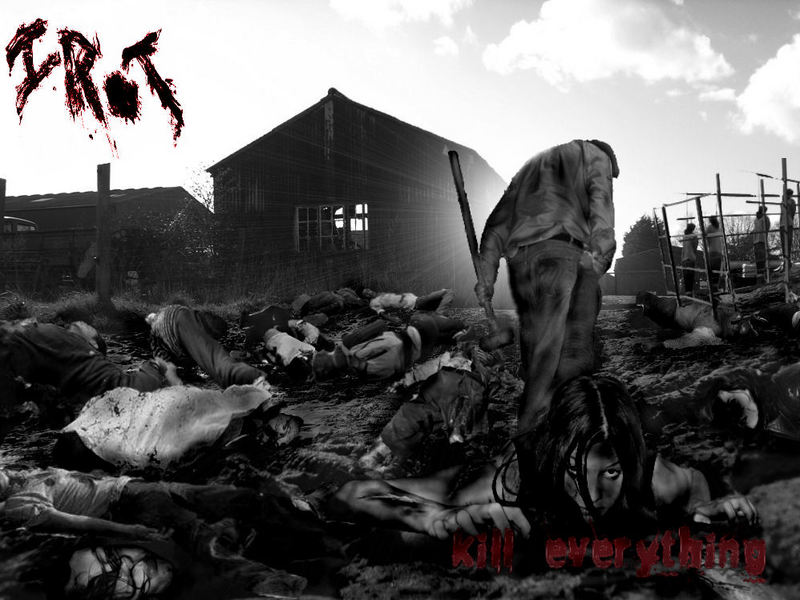 I ROT – Kill Everything

This week, I was fortunate to procure a copy of Kill Everything, the 2007 demo from Seattle's I Rot
[MySpace]. I had been looking forward to hearing this disc since last November, when I caught their very cool set in
support of Finntroll.[Link] Interestingly enough, my listening experience with regards to the demo was similar to that
of their live offering: I Rot takes a few tracks to build up a head of steam, but once they do, look the fuck out.

The disc features a garage-y gutbucket production job, which suits well the bands brand of death metal,
providing them with a sound reminescent of King of the Sidewalk era Gehennah tearing off an album of cover
tunes from The Haunted. This is some grimy, pissed-off music, and while the production definitely captures that
old school vibe, the muddy mix does rob the guitarwork of some of it's teeth-kicking power.

The album kicks off with "Travelin' Man", the first in a series of several solid if nondescript grinders. Fear not
though, I Rot tends to save the best for last, as track five grabs the listener by the throat and throws them bodily into
the album's truly great second half. 'Lines to Cross", The fantastic "Nothing Left but Murder", "Death Merchant",
"Whoregun Grinder", the title track, and "Hell Has Come" are each excellent neck-snappers, and close out the disc
in absolutely crushing fashion, as frontman BJ presides over all with his throat splitting roar.

In closing, it takes a couple of cuts to get rolling, but if the crustiest in death metal is your bag, then snap up this
half rack 'o rage while you still can.

Check out I Rot on episodes 10 and 13 of The BoneBat Show!