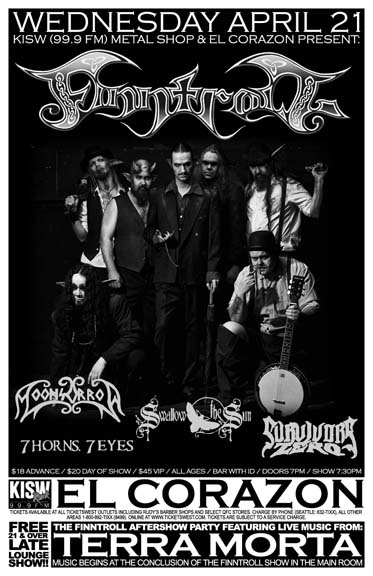 Finntroll, with Moonsorrow, Swallow The Sun, 7 Horns 7 Eyes, and Blood and Thunder


Flagons were once again hoisted high in honor of Metal last month, as I returned to the venerable
El Corazon [Link] for the Seattle stop of the Finnish Metal Tour, and another opportunity to catch the
mighty Finntroll live. Since the release of latest CD "Nefilvind", I have been looking forward to hearing how
the new cuts would fit into the live setlist, so there was no way I'd be missing this one. 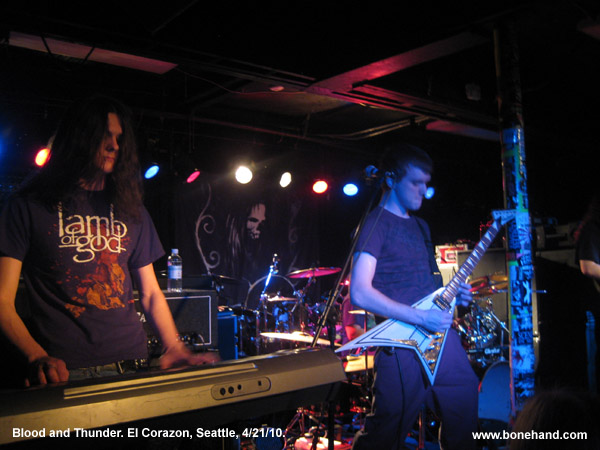 Unfortunately, brutal eastside traffic conspired to keep me from seeing all of it, and I did miss all
but the last 2 songs from opening act Blood and Thunder. That said, I liked what little I heard. Seattle's
Blood and Thunder [MySpace] turned in some straight-up Swedish flavored death metal with exactly
the sort of  Maiden-esque twin guitar flourish, that I am a sucker for, along with solid lead vocal work from
drummer Ryan Yancey, who made a touching dedication to a friend in failing health before kicking off
the final rip-roaring track. I look forward to hearing more from this band. 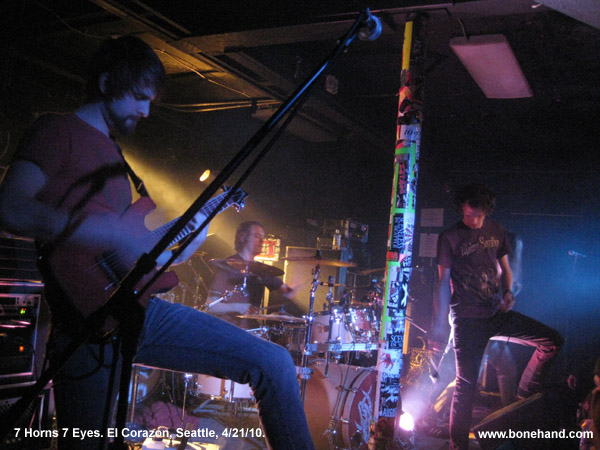 Next up was 7 Horns 7 Eyes [MySpace], also from Seattle; their fat, sludgy seven-string sound an
instant contrast to that of the previous band. I really enjoyed this band's fantastically sinister sound and post-
metal touches, but I did have a few gripes with the presentation. Not to be too harsh here, but I hate to see
a band tune up in the middle of a song, or fiddle with their laptops too much, or a frontman wandering
aimlessly during a solo. I appreciate musical precision, but in this case I felt it resulted in music that came
across as too “constructed”, without a lot of dramatic presence or concern with engaging the room. Once this
band learns to aim their formidable talent at the crowd, they will positively own. Until then, 7 Horns 7 Eyes
needs a few more balls. 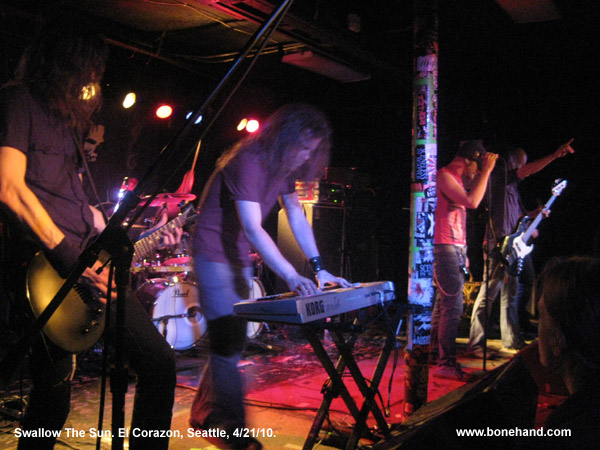 New to me was the first Finnish act of the evening, Swallow the Sun [Home, MySpace], who wasted
little time in erecting a wall of spinning hair and somber yet catchy metal, providing the evening's first serious
headbang. Swallow the Sun definitely grabbed hold of the crowd with their grandiose, atmospheric riffing and
deep register vocals, which served as a calm before the raucous storm to follow. The tunes "These Hours of
Despair" and "Sleepless Ones" were definite standouts. Cool set, but damned if Swallow the Sun didn't make
me REALLY miss Sentenced. 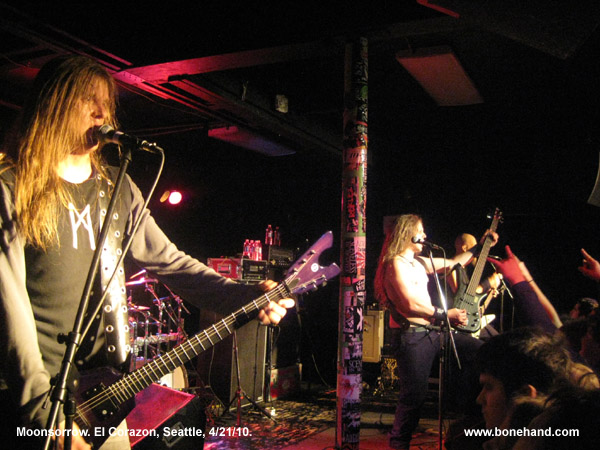 Also a first for me was Helsinki's Moonsorrow [Home, MySpace], although I have long been aware
of their existence as the other band where Finntroll founder Henri "Trollhorn" Sorvali hangs his helm. As "Trollhorn"
did not tour with Finntroll on the Ur Jorden's Djup tour (as chronicled HERE by yours truly), it was my hope
that he would join both bands on the road this trip. It was not to be, however Moonsorrow's brand of "heathen
battle metal" was well marshalled by Trollhorn's brother, frontman and bassist Ville Sorvali. Moonsorrow's
epic, historic thunder finally ignited the mosh pit, bringing to mind a heavier version of Ensiferum. Great music,
topped by priceless intros from Sorvali. To whit: "Around 1100 or so, no one quite knows the year, a Swedish
bishop tried to bring Christianity to Finland. He FAILED! A peasant named Lalli met him on the ice at Lake
Köyliönjärvi... and SLAYED HIM!” Learning things can be fucking awesome. I was impressed with Moonsorrow's
set, particularly the sprawling "Firestorm, chapters 5-9". Hopefully with this in mind, now I will stop confusing
them with Moonspell. 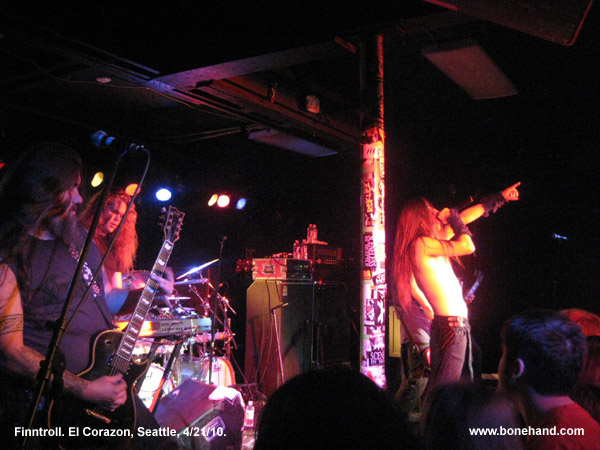 With that, it was time for the rollicking Finntroll [Home, MySpace] to take the stage, and rollick they
did, favoring the stalwart midweek crowd with an excellent mix of old favorites and new cuts. By way of new
tracks,the raging "Solsagen", the Boingo-meets-Metal "Den Frusna Munnen" (hilariously referred to as "Boingo"
on the setlist) and awesomely raucous personal fave "Under Berget’s Rot" stood tall with classics "Aldhissla",
"Kitteldags", and crushing crowdpleaser "Trollhammaren", meshing perfectly in an excellent set. Frontman
Vreth's stern visage notwithstanding, it is always great to see how much fun this band has on stage, as guitarists
Tundra and Skrymer cross back and forth, exhorting the crowd and each other to greater heights as they douse
the room in beer-soaked, folk flavored, mosh friendly metal. A brisk encore, and the show was Finnished, although
as always with regards to Finntroll, far too soon. There is little more to be said than, if you haven't, or even if you
have...See Finntroll NOOOWWW! 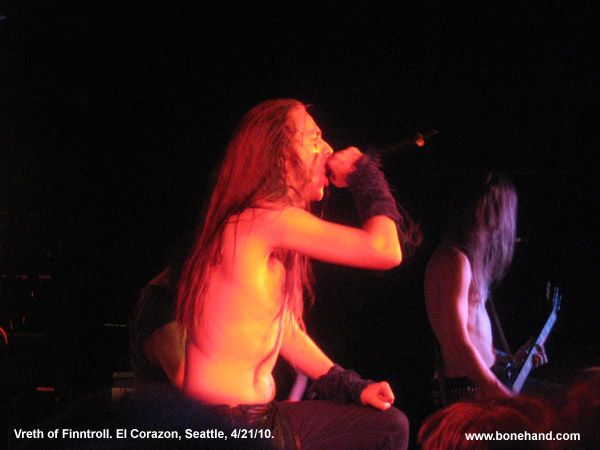 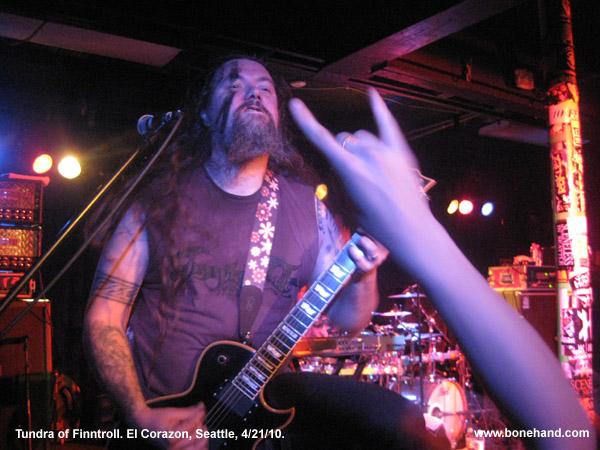