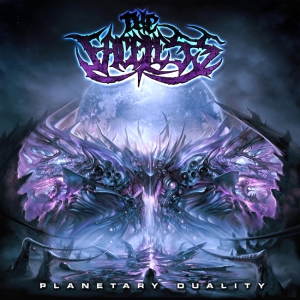 
“A vile adversary approaches with haste; the immense conqueror hides the sun…”

So begins the title track of Planetary Duality, the latest from Los Angeles based tech/prog/death metal collective The Faceless [Link],
authors of the brilliant 2006 debut Akeldama, a disc I did my level best to wear out over the past 18 months. As I stated in my reviews of the last
two Summer Slaughter tours,[2008 Link], [2007 Link], I have long been impressed with The Faceless, and their rare ability to make highly
technical metal accessible to ALL metal fans, through singular songwriting that incorporates cutting edge technicality with a great sense of
metal history, something which I find truly notable for such a young group. As such, I couldn’t wait to hear this latest release, although wait I
would due to a local music chains preposterous inability to ever get the damn thing in stock. But that’s another story…

Speaking of stories, with Planetary Duality, The Faceless have rolled out another epic in the footsteps of Akeldama’s tale of plague and
terror. Opening track “Prison Born” blasts off proceedings with a bludgeon, the beautifully interlocked guitar-tistry of Michael Keene and Steve
Jones attacking like power drills, as front man Derek Rydquist alternates his trademark roar with a modulated robotic vocal to kick off this Lovecraft-ian
tale of an ancient interstellar evil bent on mankind destruction, drenching the senses with the eerie sci-fi vibe.

The nimble Bass-work of Brandon Giffin leads off the amazing “Ancient Covenant”, which cycles through a rapidly ascending sweeping riff,
powerful chords, and a soaring other-worldly guitar solo in an excellent mix of technicality and atmosphere.

The soothing “Shape Shifters” lulls you into a false sense of security before the band once again brings the pain with the masterfully
schizophrenic “Coldly Calculated Design”. The tune comes at you hard and fast in a flurry of styles and textures, it’s brutal initial melody soon
giving way to a stuttering Maiden-esque mid-section, another floating solo, a Rush style progression, and a Cephalic-ally crushing close.
Lyle Cooper’s phenomenally precise drumming truly stands out here as the band flows effortlessly though the many twisting time changes.

Next, the blackened metal shredding of “XenoChrist”, made complete by another magnificent, wailing solo, precedes the ploddingly heavy
crunch that drives “Sons of Belial”, a tune that entwines sinister brutality with a soulful, cleanly sung chorus a la Scar Symmetry to further the overall
narrative.

This is followed by the epic “Legions of the Serpent”, which layers ever building shred with jazzy asides, a Spanish guitar flourish and even a
calliope-esque piano interlude a la Hunab Ku, highlight of which is a grin-inducing old school metal guitar solo.

Finally we come to the terrified radio message that kicks off the 2 part epic title suite, in which The Faceless put on a clinic of supremely
crushing riffage, the perfect close to this fantastic disc.

As a matter of fact, my only complaint that prevents me from awarding this release with my third 10 of the year is that at a mere 32 minutes,
Planetary Duality is over way too soon. I find it impossible to fault the music on display, but I'd love to see a full hour of this kind of creativity for my
hard earned dollar.

That said, The Faceless have absolutely nailed it once again. Planetary Duality is brilliantly brutal, compellingly listenable and absolutely
riveting. Own it. 9/10