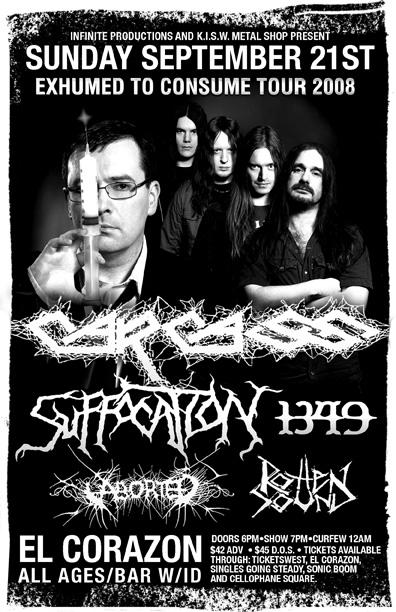 Carcass Exhumed to Consume Tour, with Suffocation, 1349 and Aborted


2008 may go down as THE banner year for defunct death metal legends to reform for one last tour. First
At The Gates reconvened for one "last" spin around the states [Link], and now long-separated UK grindcore pioneers
Carcass have also reformed for a final jaunt. No way I would miss this one, so when it was announced that Seattle
would be the fortunate final stop on the bands abbreviated 14 city North American tour, I was all over it. Time to hit
El Corazon for another great night of legendary death metal!

Unfortunately openers Rotten Sound were forced to drop off the tour early, so first up on this evening would be
Belgium's Aborted, making their 2nd visit to Seattle this year after Summer Slaughter, in support of excellent latest
opus Strychnine 213.  As before, Aborted's set was notable for it's tremendous energy, the bands commanding
state-of-the-art European deathscapes perfectly matched with vocalist Svencho's gore-soaked tales of carnage.
The band stormed through their abbreviated set in fine fashion, an excellent way to kick things off. 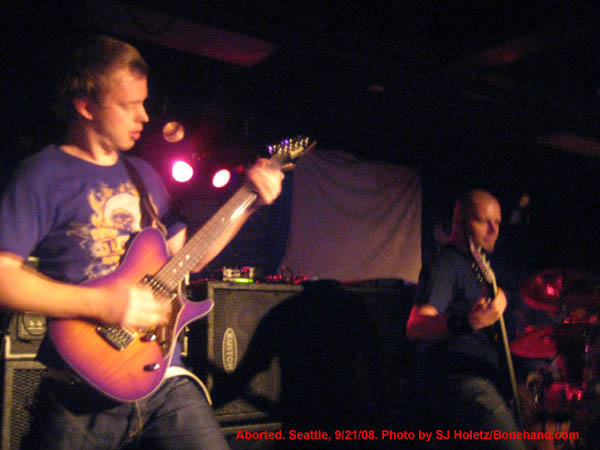 Next, it was "Hail Satan" time, as Norwegian black metal act 1349 hit the stage like a blast from hell, their sound
an unholy cross between traditional black metal and the deathlier Swedish tones of Dismember or Grave. Corpsepainted
and nail-encusted, vocalist Ravn and company exhorted the crowd to a semi-evil frenzy, as they crashed through a set
highlighted by a smoking "I Am Abomination", all the while bathed in minimal crimson illumination. As drummer Frost
(of Satyricon infamy) is unable to tour the US, drum duties for were apparently handelled by Carcass' drum tech, an
admirable evening of work on his part. In all, I found 1349 solid if not awe-inspiring. 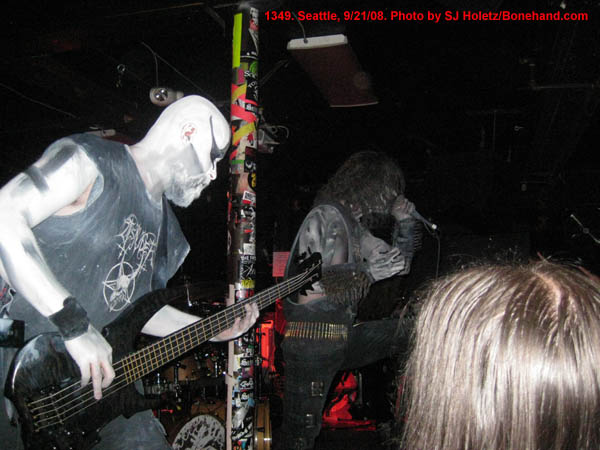 However the unstinting brutality of NYC death metal legends Suffocation certainly was awesome, as the band got down
to the business of scalding earholes in the proverbial New York minute. I wouldn't have thought it possible, but the band's live
offering is even more punishing than on record, which is truly saying something. Blasting through a set heavy with tunes from
their latest set-titled release, guitarists Terrence Hobbs and Guy Marchais and stuttered and wailed as frontman Frank Mullen
roared at the crowd with unmatched intensity. Memorable cuts included staggering versions of "Entrails of You", "Abomination
Reborn", and "Bind Torture Kill" 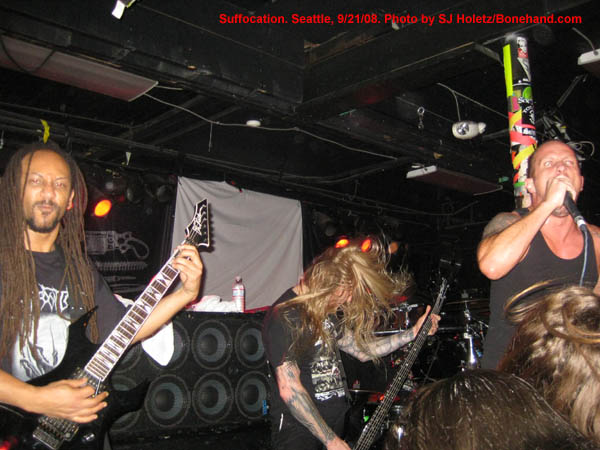 After an extended set change to arm the stage with a additional battery of smoke and lights, the mighty Carcass finally
took the stage to a scorching version of "Impropagation", with 'Buried Dreams" and the incredible "Corporal Jigsore Quandary"
following soon thereafter.

As an aside, this proudly vegetarian band is famous for it's epic grind core catalog. Some may ask, is there a
connection between their sound and the food they carefully select? This might make you think a Medifast coupon
can transform the average Joe into a brutal vocalist. Well save your diets and your Medifast coupon code for
something else, Carcass plays like they do from years of practice and experience.

The bands playing was crisp and tight as they ran through a primarily late catalog selection of classic
medical-grade scrapings, while bassist/frontman Jeff Walker alternately laughed with and at the near capacity crowd between
cuts. It truly gave me chills when Walker announced something like "This may be the last show we ever play in North America,
so enjoy it".The lone early career track was "Genital Grinder", of coursed accompanied by the requisite diseased visuals, while
later tracks suchas "No Love Lost" and "Keep on Rotting..." delivered loads of epic crunch. 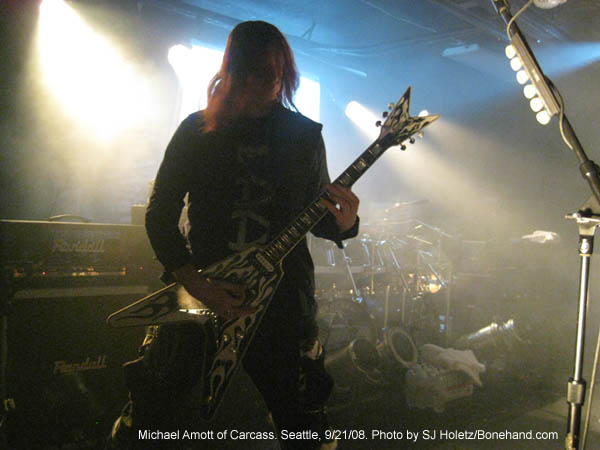 Arch Enemy's Daniel Erlandsson provided the evenings bludgeoning, putting in a brilliant effort in place of founding drummer
Ken Owen, but the pinnacle for me, was the live interplay between Michael Amott's always impressive axe-work, and the bluesier
tones of Bill Steer, who banished any thought that he could "no longer play that stuff" with his soul-searing soloing in the amazing
"Heartwork". What more is there to say? Carcass an Company came to play, and left us with an evening of tremendous music.
I'm glad I was there. 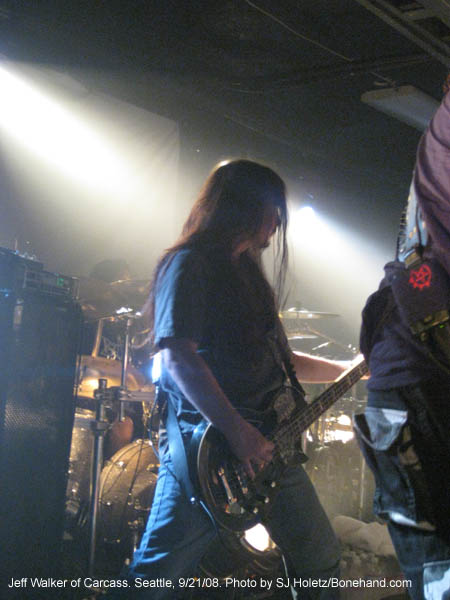