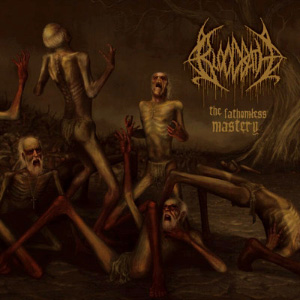 
Mikael Akerfeldt is a busy man. Hot on the heels of the release and tour for Opeth's Watershed, Mikael jumped back into the studio with Swedish
supergroup Bloodbath to record their latest platter of molten death, The Fathomless Mastery.
For the uninitiated, Akerfeldt originally formed Bloodbath in 1998 with Dan Swano and Anders "Blackheim" Nystrom of  Katatonia/Bewitched fame,
in order to fulfill their urge to play the old-school Swedish death metal that we all know and love (much as ex-Entombed, Ex-Hellacopter Nicke Anderson
would later do with his own Death Breath). Two incredibly strong releases followed in the Breeding Death Ep and Resurrection Through Carnage. Akerfeldt
stepped away from Bloodbath in 2004 to focus on Opeth, and was replaced by Hypocrisy's Peter Tatgren for the steller Nightmares made Flesh. Mikael
rejoined the band late last year in time to cut the Unblessing the Purity EP, which has yet to be released stateside.
As a huge fan of Grave, Entombed and Dismember, I really dig the band's first three releases, so when I heard that Bloodbath was releasing a new
album this fall, it was an instant Must Buy for me, I couldn't wait to hear it. Unfortunately, The Fathomless Mastery fails to live up to my lofty expectations.
The CD leads off with the black metal tinged "At the Behest of their Death", which displays a marked change in the bands guitar sound, from fat, low
and Entombed to something more shrill and mid-rangy, the band taking the hollower sound of Unblessing and diluting it even more. The tune's nondescript
riff is coupled with rampant pinch squeals and swirling vocal effects to provide an atmospheric vibe that is somewhat of a departure for the band.

Next, "Process of Disillumination" alternates a speeding descending melody with a measured plod, resulting in half of a cool song. "Slaughtering the Will
to Live" improves on it's predecessor with a even better hook, but again the guitar sound lets the song down, rendering it a pale copy of the bands previously
explosive output. Then the album settles into a pattern of mid-paced scrape jobs, interspersed with the odd thrash and burn, or more atmospheric effects such
as the chiming bells and wind that lead into "Treasonous", or the bullhorn mumbles that accompany closing track "The Wretched Human Mirror".

All is not lost though. Akerfeldt's deathly vocals sound fantastic as the band tries the stutterring-triplet Meshuggah thing with some success in "lesous".
Late album cuts "Earthrot" and "Hades Rising" stand above the rest, if falling well short of career highlights such as "Eaten", "Soul Evisceration" or "So You
Die". Frankly, I miss the thick syrupy guitar tones found on Resurrection and Nightmares. The Fathomless Mastery has the feel of being tossed off too
quickly between other projects, leaving us with a release bereft of the catchy riffage and sinister energy I have come to expect from Bloodbath. Even the
art is weak and non-scary, a tired illustration of scrawny old men writhing on a field of sepia and feces.

I hate to say it, but it seems that on The Fathomless Mastery, Akerfeldt and company have allowed too much of their primary projects to seep into
Bloodbath's signature sound. Don't get me wrong, I love the atmosphere inherent in Opeth's work, but I don't look for that from Bloodbath. When I put
on Bloodbath, I want music with a mean streak, chainsaw guitars and gore spattered walls. While The Fathomless Mastery is solid and proficient as
you'd expect from such talented musicians, it's far too laid back and underachieving to scratch that particular itch. 6/10

1. At the Behest of Their Death
2. Process of Disillumination
3. Slaughtering the Will to Live
4. Mock the Cross
5. Treasonous
6. lesous
7. Drink from the Cup of Heresy
8. Devouring the Feeble
9. Earthrot
10. Hades Rising
11. Wretched Human Mirror