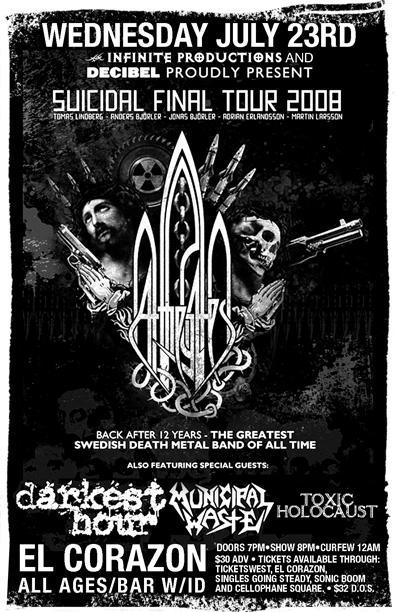 At The Gates Suicidal Final Tour, with Municipal Waste and Toxic Holocaust


While I have been a fan of At The Gates for close to a decade, I unfortunately discovered the Swedish
titans well after they had broken up, so I had long given up any hopes of ever catching them live. So when
tickets for this 2008 reunion tour were announced, I was all over it. AT THE GATES, MAN! Thus it was that
I arrived at El Corazon on this fine summer night, fired up and appetite whetted for an evening of classic Swedish
death metal.

But first, the openers! Unfortunately, Darkest Hour were plagued by transportation issues somewhere in
wildest Idaho and unable to make the gig, but in some ways that turned out to be a blessing, as remaining
openers Toxic Holocaust and Municipal Waste were given presumably longer sets, making for a solidly
concise two hours of thrashy retro goodness prior to the headliners.

Portland trio Toxic Holocaust took the stage first with lead guitarist, vocalist and musical mastermind Joel Grind
leading his troop of thrashers through their marshall paces, as they strafed the crowd with renditions of
"War is Hell", "Wild Dogs" and "Endless Armageddon". Great stuff, that raw throwback sound immediately
reminding me of summer nights long past, spent skateboarding, sneaking beer and rotating between
Bonded By Blood, Ride the Lightning, and Dealing With It ...all on vinyl. Very Cool. 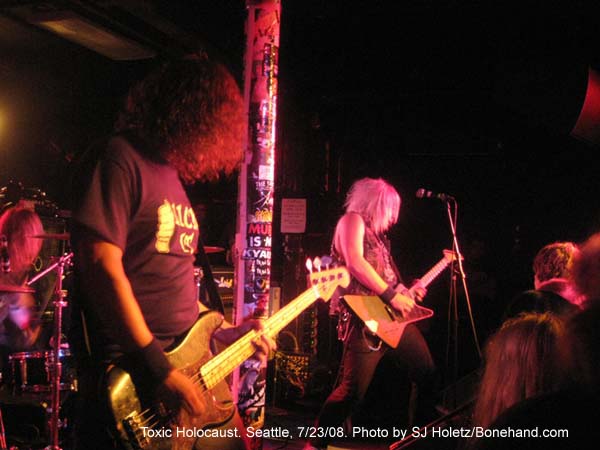 Next Up, Municipal Waste from Richmond, Virginia, who brandish a brand of infectious thrash that
runs along the Anthrax axis, complete with fine chops and a fanastic sense of humor. Frontman
Tony Foresta wasted no time in working the capacity crowd into big ol' circle mosh behind tunes like
"Terror Shark", "Beer Pressure", and the brilliantly titled "Thrashin' of the Christ", while guitarist Ryan
Waste laid plenty of his own on mid-set high points "Sadistic Magician" and a smoking cover of "Insecurity"
from Cali skatepunk legends Excel. And check out the cool ass logo guitar! No two ways about it,
Municipal Waste put on one hell of an entertaining show, and I look forward to catching them again. 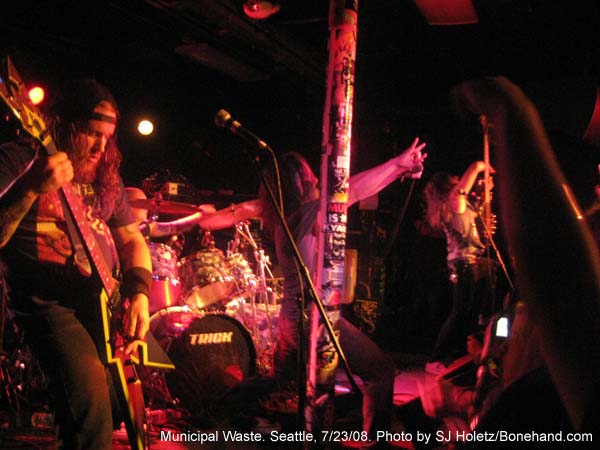 As much fun as the openers were to listen to, it was finally time to get down to business. Soon the
club darkened and the mighty At The Gates took the stage once again, bathed in sickly red light
as they led with a crushing "Slaughter of the Soul". The raging guitarwork of Anders Bjorler and Martin
Larrson, proving every bit as precise and crushing as on their recorded output, was anchored by Jonas Bjorler's
thundering bass and monster drumming by Adrian Erlandsson, while singer Tomas Lindberg's
distinctive howl was in fine form.  Their music a blackened ball of the purest Swedish death. Original members
all, the band picked up right where they left off 12 years ago, tearing through favorites from every facet of
their storied and influential career. Personal faves: red hot versions of "Terminal Spirit Disease", "World
Of Lies", "The Swarm", "Forever Blind", "Nausea", and "All Life Ends". Throughout their set, At The Gates
hit all the high points with awesome power and finesse.

After a brief break the band returned with a scorching encore of the incredible "Blinded by Fear",
"Suicide Nation" and "Kingdom Come", leaving me exhausted and speechless. What more can one say
about such a magnificent evening of metal? If you missed this one, you lose.

Now if only Carcass would tour again...heh heh heh. 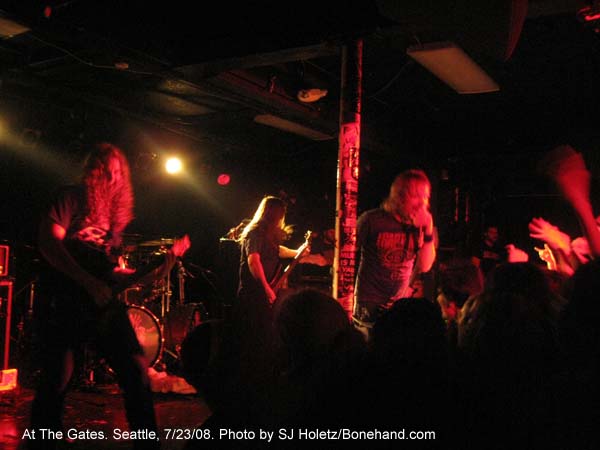 TOXIC HOLOCAUST
(I have no clue...)