Ministry, with Meshuggah and Hemlock

It's been a while since I got out of the house to procure a good ear-ringing, so my interest was picqued last

month when I saw that Ministry would be coming to town on the C U La-Tour. Not to say that catching Ministry for my
4th time on their perhaps final tour wasn't appealing, but the thing that truly drew me from my winter slumber was
the opportunity to take in a set by Sweden's Meshuggah, who's latest piece o' plastic has been in heavy rotation in
the Bonehand cranium for the last month. And so it was that Mrs. Bone and I headed out into the SNOWY??? March
Seattle night to catch another evening of badass live music. 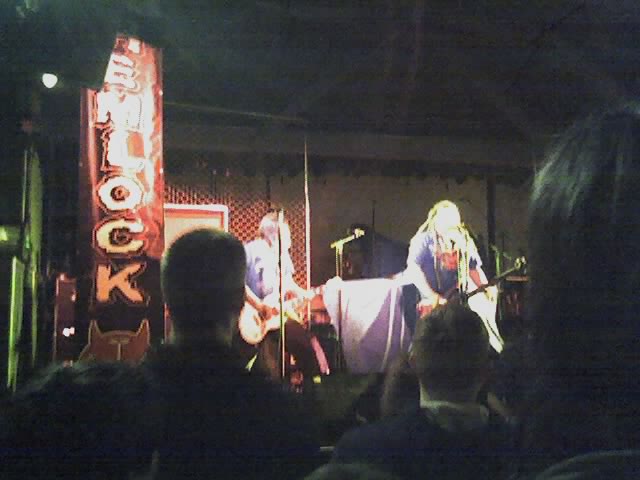 First up this fine evening would be Hemlock out of Las Vegas, who did a solid job warming up the crowd with
their own catchy brand of metalcore. The band was tight and professional, and lead vocalist/bassist Chad Smith
flat busted his ass working the crowd.  Good riffs, and a huge effort, even if their sound wasn't quite unique.

The same cannot be said for ’s Meshuggah, who stand alone with their singular brand of sci-fi death
metal. The band hit the stage amidst the roar of vocalist Jens Kidman, his hands raised to the sky, as guitarists
Frederik Thordendal and Marten Hagstrom, and bassist Dick Lovgren stood monolithic (counting?), their high-tech riffs
stuttering and staggering with alien 8-stringed tone, to the asymmetric precision of drummer Tomas Haake's insane
rhythms. This is music as mesmerizing as a Cobra waiting to strike. Simply tremendous stuff.

Digression 1: I have to give props to Ministry mastermind Al Jourgensen, this guy's got balls for days. Unlike
many acts who might hesitate to tour with opening acts that might upstage them, Ministry almost always
brings a monster bill with them. This has been the case since I saw them in LA in 1992 with Helmet and
Sepultura opening, a show in which Anthrax axe-man Scott Ian joined Ministry on stage for "Supernaut",
Awesome. This trend continues today, as I would think any band might be intimidated to follow the red
hot Meshuggah, incredible musicians all, touring behind an absolute album of the year candidate in the
incredible ObZen. Well played, Mr Jourgensen.

Which brings us to the evenings headliners, as Jourgenson and Co. hit the stage to a roaring version of
the last album's leadoff track "Let's Go". led by Prong guitarist Tommy
Victor and Static-X bassist Tony Campos, Ministry's frontman leaned heavily on his bone-encrusted Mic stand,
a lectern from which he relentlessly poured a torrent of anti-Bush venom. The main set was made up
exclusively of tracks from Ministry's last 3 albums, The Last Sucker, Rio Grande Blood, and Houses of the Mole,
serving up a scorching indictment of the last 8 years of U.S. politics. High points were "Watch Yourself"," No W",
"LiesLiesLies", and a monster version of personal recent fave"Rio Grande Blood."

That being said, the sold-out crowd that had turned out for Ministry's last tour had clearly come not for these
tunes, but to hear a few old favorites one last time, a fact perfectly illustrated by the crowd's batshit response to the
band's first encore, which was an absolute tour de force. Joined by Fear Factory's Burton C. Bell on vocals,
Ministry proceeded to rage through killer versions of "NWO", "Just One Fix" and "Thieves", fifteen minutes of
classic industrial that made it all worth while for me.

This was followed by a lackluster second encore comprised of classic rock covers which can be found on their
latest compilation Cover Up. Frankly, I would have been much more satisfied had the band seen fit to kick my ass one
last time with a little "Stigmata", "Burning Inside", and "So What!", but Hey, after 20 years of good music, if a mediocre
covers encore makes Big Al happy, I guess I can take one for the team.

Digression #2: Top 3 Songs that are invariably rolled out for rock band encores, that if I never heard
again it would be too damn soon.

(I'm not 100% about these, so if anyone cares to correct me for the record,
fire a missive to steve@bonehand.com, and I would be glad to credit you.)

HEMLOCK
Nobody Knows
My Eyes Itch
?
No Time For Sorrow
?

The Mouth Licking What You've Bled

MINISTRY
Intro: I'm Not Gay
(song excerpt from the forthcoming Sexo Olympico
by Revolting Cocks, Due out Fall 2008)